It’s Awards season and we here at Full Circle Cinema have a bevy of differing opinions regarding who or what deserves to win big at this year’s ceremonies. With Full Circle Forecast, we break down the nominees for the biggest categories and give personal predictions for who we think will be taking the coveted statuettes home at the grandest stages of them all. 2020’s biggest cinematic celebration is The 92nd Academy Awards, often affectionately referred to as The Oscars, which celebrates the best in film from 2019. Despite some pretty big oversights and snubs this year, here are our picks in the biggest categories of the evening. 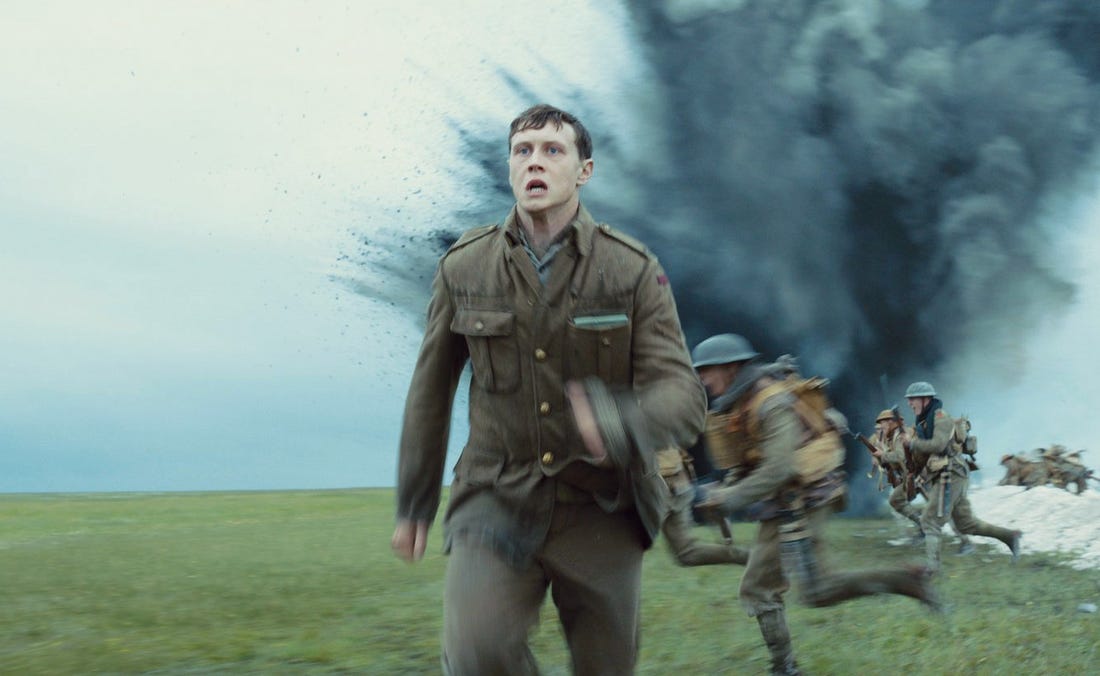 This year’s Best Picture race is truly anybody’s ball game. With a litany of choices, the list of frontrunners is staggering. However, 1917 is right in that sweet spot in-between being an Academy darling and having enough fan support to push it over the top. Viral clips of just how the film’s large action pieces were put together have made the rounds. Moreover, Sam Mendes has already taken home the Critic’s Choice and Golden Globes Award for Best Director. I expect to be pleasantly incorrect in this category, as Parasite and Once Upon a Time in Hollywood are just as likely to claim the evening’s top prize. 2019 was an all-around great year for cinema.

Parasite already made history when it became the first non-English film to win the Screen Actors Guild Award for Outstanding Performance by a Cast in a Motion Picture. The film cracked the top of every publication’s top ten of 2019 list (including number 3 on Full Circle’s list). That success is due largely to the creative direction of Bong Joon-ho. Additionally, this predicted victory will come at the expense of cinematic legends like Scorsese and Tarantino. That will be historic. However, the aforementioned Sam Mendes could very well sneak in and claim this one for 1917 as well.

This is another absolutely stacked category. Joker felt like the performance of a lifetime for Joaquin Pheonix and his time to shine at The Oscars is now. After failing to secure the Best Actor trophy in both 2006 and 2013, Phoenix will claim the award for one of the most controversial and divisive films in recent memory. The actor has already claimed the prize at this year’s Golden Globes, Critic’s Choice, and SAG Awards ceremonies. Expect Pheonix to continue standing on the shoulders of Heath Ledger with a huge win for comic book movies.

For the first time since 2004, Zellweger will return to the Academy Awards. However, after countless wins this Awards season already, she seems like a lock to win Best Actress at the 92nd ceremony. Her turn as the iconic Judy Garland had fans and critics alike reaching for the nearest box of Kleenex. Her ability to completely transform into the well-known singer was unreal and this level of recognition is certainly well-deserved. Following an almost 20-year hiatus from the Oscars stage, Zellweger will solidify her place in cinematic history this year.

Prediction: Brad Pitt – Once Upon a Time in Hollywood as Cliff Booth

Ever get the feeling that we are in the golden age of cinema? This is yet another category that reads like a best actors of all-time list. One of the most entertaining aspects of this year’s awards season is Brad Pitt’s eclectic acceptance speeches. At both the Golden Globes and SAG Awards they are filled with gratitude and humor and fans should expect that trend to continue. Pitt’s turn as stuntman Cliff Booth will finally earn the prolific actor his first Academy Award for acting after losing in 1996, 2009 and 2012 for 12 Monkeys, The Curious Case of Benjamin Button, and Moneyball, respectively. And honestly, after those acid-induced final moments of Once Upon a Time in Hollywood, he deserves it.

Laura Dern has long been one of the most adaptable and reliable actresses in the game. From the original Jurassic Park to Star Wars: The Last Jedi, her on-screen presence has been formidable, to say the least. However, her work has largely gone unrecognized by the Academy. Previously, Dern was nominated for Best Actress in 1992 for Rambling Rose and Best Supporting Actress in Wild, two fantastic films, but failed to claim the award. However, after she found great success in HBO’s Big Little Lies, people started to take note. Additionally, her role as a take-no-prisoners divorce attorney in Marriage Story has already earned her a Golden Globe and SAG Award this year. Expect that trend to continue has Dern has her name called once again.

Prediction: Once Upon a Time in Hollywood – Quentin Tarantino

Any film in this category could win Best Original Screenplay and it would have been well-deserved. However, only one nominee has already won this award twice. Tarantino, who won for both Pulp Fiction in 1994 and Django Unchained in 2012, seems like a safe bet. I would be blown away if the evening ends without Tarantino taking the stage. Additionally, eyes should also be Rian Johnson to possibly slide in a snag his first for the criminally under-nominated Knives Out.

Prediction: Little Women – Greta Gerwig based on the novel by Louisa May Alcott

Little Women has been done before and Little Women will be done again in the future. However, Greta Gerwig’s Little Women was unique. There’s a reason Full Circle Critic Daniel Hrncir chose it as his favorite movie of the year. Riddled with patriarchy-challenging, powerful speeches and hysterical moments throughout, it would be to the surprise of absolutely no one if Gerwig managed to earn her first Oscar this year.

In my opinion, the biggest upset of this year’s Golden Globes was the surprise victory for Missing Link. Disney usually seems like a safe bet in animated categories, however, that proved to not be the case this year. Regardless, Toy Story 4 was a special event for every generation and ended one of the most beloved franchises of all time. The incredible animation paired with the existential crisis storytelling feels like exactly the sort of thing The Academy will fawn over this year. Additionally, it would follow Toy Story 3, which took home the Oscar back in 2011 (the Best Animated Feature category was yet to be established back when Toy Story and Toy Story 2 would have been eligible). 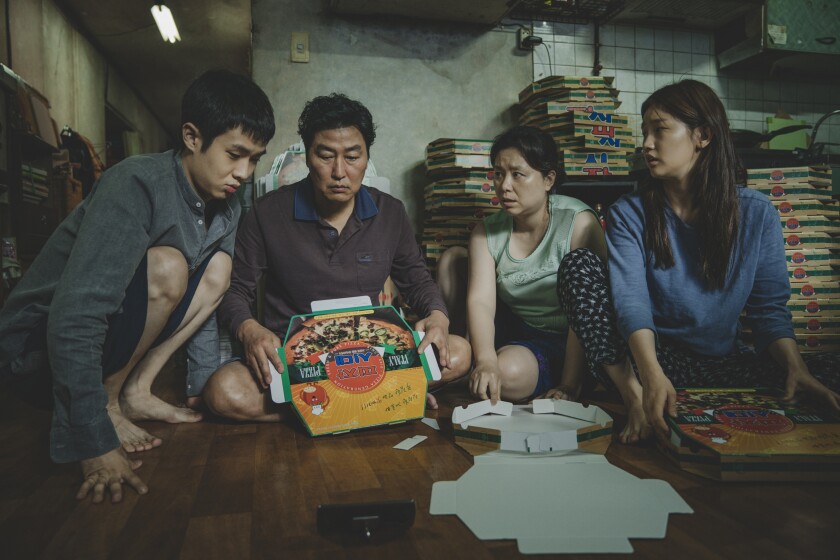 This one feels like a shoo-in as Parasite could very well end the night by taking home Best Picture. This win will give fans on a larger-scale the chance to be charmed by the eloquent Bong Joon-ho during his acceptance speech like many of us have been this year.

As stated in Full Circle’s Best Film Scores Of 2019, “Hildur Guðnadóttir captures the visceral and intense nature of the film with tracks like ‘Bathroom Dance.’ Demented strings and crazy clowns are aplenty.” Throughout the night, look for the Academy to honor Joker, which touts receiving the most nominations this year, in as many categories as they can. This one would be more than deserved as the score, oftentimes, created this uneasy feeling of tension and stress throughout theaters all over the world on Joker’s way to becoming the highest-grossing R-rated film of all-time.

Prediction: “Into the Unknown” from Frozen II – Music and Lyrics by Kristen Anderson-Lopez and Robert Lopez

This prediction is more of a personal one. I loved Frozen II and was appalled upon finding out it had been snubbed in the Best Animated Feature category. That being said, “Into The Unknown” did the impossible and out-did Elsa’s “Let it Go” from the first film. Idina Menzel is a vocal powerhouse and she shows her astonishing range with this song. Her performance at the upcoming ceremony will be unreal.

What do you think? Do you agree or disagree with these choices? Be sure to let us know your thoughts and predictions in the comments below! – Christian Hubbard

'Crimes of the Future' Review: "Too Much To Be Desired"

Another Valkyrie Is Rumored To Appear In An Upcoming MCU Project