Awards season is back! Our team here at Full Circle Cinema has a bevy of differing opinions regarding who or what deserves to win big at this year’s ceremonies. With Full Circle Forecast, we break down the nominees for the biggest categories and give personal predictions for who we think will take those coveted statuettes. 2021’s biggest television celebration is The 73rd Primetime Emmy Awards, which celebrates the best of the best from the last year. With some big surprise nominations and a highly anticipated ceremony hosted by Cedric the Entertainer and held outdoors, here is who we think will take home the evening’s biggest prizes.

After coming up big at the Critics’ Choice, Golden Globes, and Screen Actors Guild Awards ceremonies, Ted Lasso seems poised to continue that trend of success at this year’s Emmys. When season one first premiered on Apple TV+ last summer, the show had a small, devoted following (myself included). However, over the last year, support for the show has increased tenfold. Notably, Jason Sudeikis shines as the titular character and is surrounded by a charming supporting cast that bolsters the series in every way. Expect Ted Lasso to continue to dominate the pop culture narrative for a long time to come following the season two finale occurring a few weeks before this year’s Emmys.

A series that has been criminally underrepresented over the last few awards ceremonies is HBO’s groundbreaking Lovecraft Country. Anchored by Jurnee Smollett and Jonathan Majors‘ incredible performances, Misha Green’s Lovecraft Country is a thrilling take on Lovecraftian lore that proves demons and monsters are not the only things that cause fear in the hearts of men. The series serves as a poignantly relevant series. Using the past horrors with examples like the funeral of Emmett Till and the Tulsa race massacre, the series is equal parts thrilling and heartbreaking. While many experts will pick The Crown for this category at the Emmy Awards, my heart is with the folks whose creativity made this show HBO’s hottest ticket over the last year.

While the year is far from over, nothing has controlled social media conversations quite like Marvel’s WandaVision did for nine weeks earlier this year. Marvel took a giant leap of faith with the series launching Phase 4 of the MCU following Avengers: Endgame. From wild fan theories to incredibly heartfelt dramatic beats within storylines, the series stands as one of the most unique and well-rounded shows of the year. Constantly toeing the line between drama and comedy, superhero action and emotional speeches, Jac Schaeffer created something special. Additionally, while many experts may pick Mare of Easttown in this category, the Emmys know Marvel fans are tuning in to see their show win big. Therefore, look for the Marvel Cinematic Universe to snag its first Emmy Awards this year with an eye firmly on Disney+ for the future of the franchise.

READ: Why ‘WandaVision’ Was The MCU Series We Needed After 2020

Jason Sudeikis is quickly becoming one of the most beloved men on the internet. His portrayal as the plucky coach Ted Lasso has become a cultural phenomenon. In fact, a quick hashtag search of #TedLasso on Twitter will display fans all around the world cheering him on. With Sudeikis serving as the show’s lead actor as well as one of the creators/producers, it’s not hard to notice the amount of love he has for the character. From his quick wit in the face of adversity to his painful moments living with anxiety behind closed doors, Ted Lasso is a career-defining role for the Saturday Night Live alum. Additionally, with big wins at a host of other award shows this year already, Sudeikis is clearly the frontrunner within his category.

For years, Black-ish has been one of ABC‘s highest-rated comedies, and Tracee Ellis Ross is one of the biggest reasons why. Bow pushes boundaries. However, she does so with a more celebratory tone that educates as effortlessly as it entertains. While the series enlists a bevy of strong Black female characters, Ross’ leading role commands the attention of the viewers and her co-stars alike. Additionally, this might be the most fun and endearing acceptance speech at this year’s Emmy Awards. 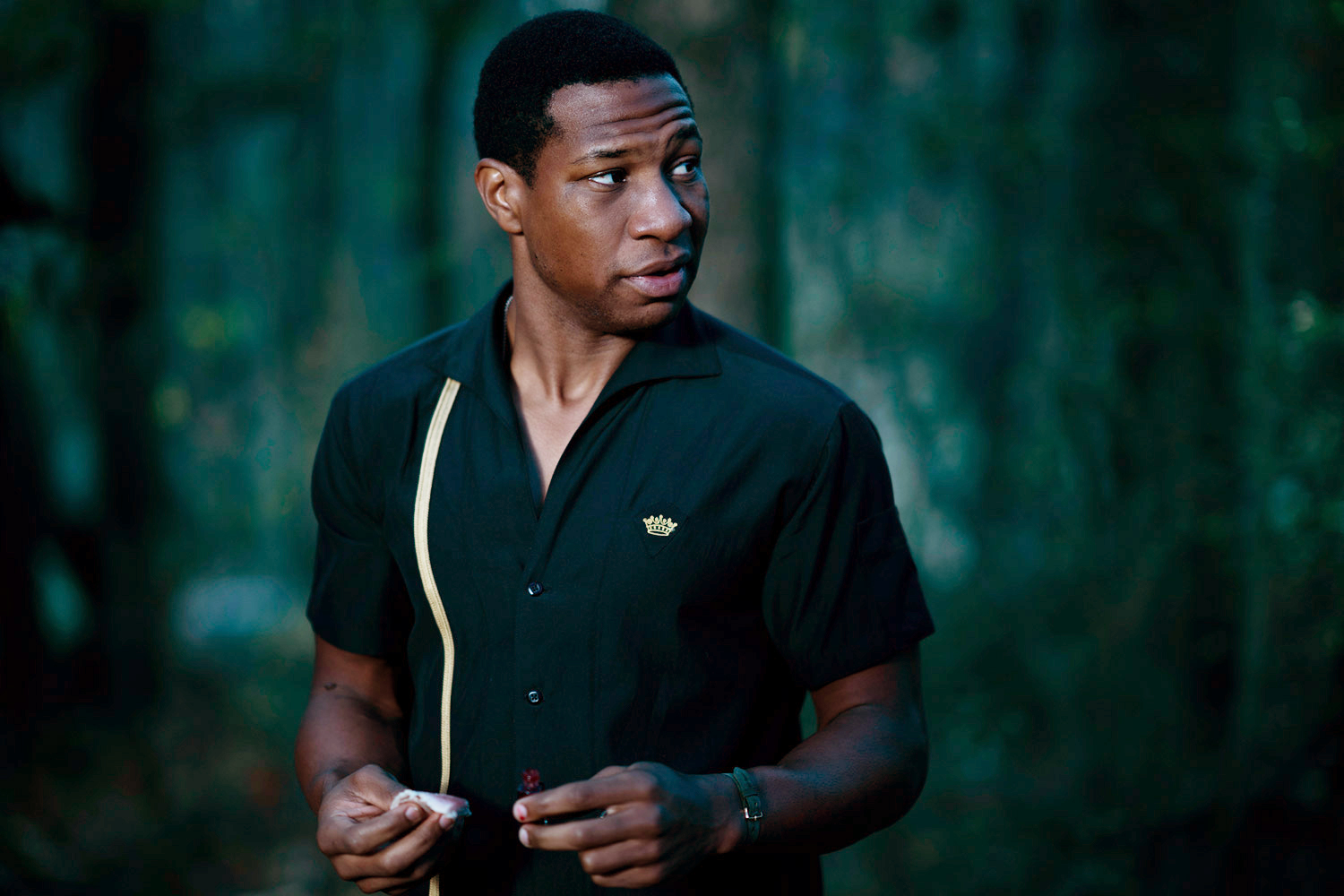 It’s easy to see Jonathan Majors has what it takes to become a major player in Hollywood for years to come. With memorable turns in films like The Last Black Man in San Francisco and Da 5 Bloods, the young actor most recently broke the internet when he made a surprise appearance in Marvel’s Loki. With a clearcut future as the MCU’s next big bad secured, it’s only a matter of time before Majors begins his own collection of awards and bragging rights. And, thanks to his gripping portrayal of Atticus Freeman in HBO’s Lovecraft Country, that collection is likely to begin at this year’s Emmy Awards.

The Academy of Television Arts & Sciences has a chance to firmly stand on the right side of history this year. Mj Rodriguez is the first transgender woman to earn an Emmy Awards nomination in a major acting category for her work in FX’s Pose. Personally, I think she should become the first transgender woman to earn an Emmy Award victory in a major acting category as well. Her character Blanca goes on an absolutely beautiful journey upon receiving an HIV-positive diagnosis. After creating the House of Evangelista, Blanca becomes the parental figure that is missing from her community. Moreover, she provides for and guides a number of children as they struggle while running a business of her own. Moreover, Rodriguez brings grace and power to every scene she’s in and deserves her moment in the spotlight for it.

READ: ‘Once Upon A Time In Hollywood’ Novel Review

Outstanding Lead Actor in a Limited or Anthology Series or Movie

Prediction: Paul Bettany as The Vision on WandaVision (Disney+)

Marvel Studios will continue its history-making evening with another big win for WandaVision. Between his hilarious antics as a clueless husband in the first few episodes to some pretty intense action sequences against himself as White Vision, Bettany pulls off some pretty remarkable acting feats. The actor delivers a line that will live in infamy with “but what is grief, if not love persevering?” with such realism that fans were brought to tears. Additionally, the season finale shows that sometimes a huge action sequence is not always the best way to properly display a superhero’s abilities. Bettany began his Marvel adventure as the voice of Tony Stark’s AI and will seemingly end his journey as a winner at the Emmy Awards.

Outstanding Lead Actress in a Limited or Anthology Series or Movie

Elizabeth Olsen is the moment. When given the chance to flesh out her character over the course of nine episodes, Olsen took full advantage. After a string of appearances in supporting capacities throughout the MCU, Wanda Maximoff in a starring role proved to be exactly what she needed. The way Olsen was able to give her character so many different layers is nothing short of sensational. Grief-stricken and all-powerful, Wanda Maximoff shines. Notably, during a conversation with Variety, Olsen explains the importance of her most recent iteration of the Scarlet Witch. “It was the first time, though, that it felt like the creative [team] really understood what was in my brain about Wanda and her life. This was an acknowledgment of these little anecdotes and moments she has had throughout the MCU, and then, like, blowing them up, and creating a whole detailed background.”

What do you think? Do you agree or disagree with these choices? Be sure to let us know your Emmy Awards thoughts and predictions in the comments below! – Christian Hubbard

The 73rd Emmy Awards premiere on September 19th. The event will be broadcast in the U.S. by CBS and Paramount+. Cedric the Entertainer is hosting the event.