It’s awards season and we here at Full Circle Cinema have a bevy of differing opinions regarding who or what deserves to win big at this year’s ceremonies. With Full Circle Forecast, we will be breaking down the nominees for the biggest categories and giving predictions for who we think will be taking the coveted statuettes home at the grandest stages of them all. Up next, 2022 will start off with the 79th Annual Golden Globe Awards, which celebrates the best in both film and television. Here are our picks in the biggest categories of the evening.

Belfast feels like a film locked and loaded to perform incredibly throughout 2022’s awards season. Director Kenneth Branagh has described it as his “most personal film”, and it’s not hard to understand why. The coming-of-age tale feels genuine, heartfelt, and personal for all who viewed it and features perhaps legacy-solidifying performances for both Jamie Dornan and newcomer Jude Hill. Furthermore, look for Belfast to make some noise during the Oscars as well.

Here’s where we begin to take a different route than many experts. With West Side Story, you have a Spielberg-directed take on a classic story with incredible performances and choreography. However, when placed side-by-side with the gut-punching and masterfully crafted story that is Lin-Manuel Miranda’s directorial debut, it’s difficult to not be more impressed. Andrew Garfield delivers a career-defining performance as Jonathan Larson and Miranda impress with his new brand of directing techniques. Personally, I wholeheartedly expect tick, tick… BOOM! to be a dark horse winner in major categories during the year’s awards season.

READ: ‘Tick, Tick… Boom!’ Review: “An Homage To The Beauty Of Creativity”

With a career fully loaded with memorable performances on the big screen, Will Smith has never been better than he is in King Richard. The actor completely transforms into Richard Williams and expertly displays his motivations for every decision he makes. The sports biopic does not follow the typical formula and places the focus on both the path Richard lays for his daughters as well as the choices Venus and Serena make on their own to earn success. Moreover, King Richard is a study on the beauty of family, and Smith’s performance is very much the biggest reason for that.

Kristen Stewart’s Princess Diana is a haunting portrayal that paints a bigger picture of the pain and sorrow she suffered as a part of the Royal Family. Stewart is a chameleon in this role as she oftentimes uses her body language to mirror what we saw of Diana while she was alive. The unfair power dynamic, the constant overcoming of criticism, and the final moments of freedom and expression make Stewart the frontrunner in any Best Actress race she finds herself in this year.

A fully transcendent experience takes place when you fire up tick, tick... BOOM! and it’s all thanks to Andrew Garfield. His surprisingly personal take as composer Jonathan Larson takes viewers on a journey that depicts the beauty and tragedy of creativity. Watching Garfield lose himself in who Larson was from day-to-day is gripping. Notably, Garfield is riding a wave of momentum all the way to numerous award show stages.

READ: ‘The Amazing Spider-Man’ Has Always Been Amazing

This year’s Best Actress category features some awards darlings like Emma Stone and Jennifer Lawerence, surefire picks destined to earn nominations. However, this year’s category also features two young performers making their film debuts: Alana Haim and Rachel Zegler. However, one actress is getting far more attention for her role than the other. Zegler astonishes with her presence and angelic voice during Spielberg’s West Side Story. The feat is even more impressive when you think that this is her first time accomplishing this sort of feat. Despite the film’s problematic elements, it’s almost a certainty that the film will tout several wins before it’s all said and done.

Supporting Actress in a Motion Picture: Ariana DeBose – West Side Story as Anita

Few shows took the world by storm in 2021 the way Netflix’s Squid Game did. The brutality is not for the faint of heart, but sharp social commentary offers an exquisite contrast and makes for a maddeningly fun binge. The South Korean series can make history this year, and rightfully so. The show feels fresh and thrilling and provides real, visceral feelings of panic and shock throughout. Additionally, with fans and critics alike still bringing the series to the forefront of pop culture, seeing the cast and crew come together on stage will bring smiles to the faces of viewers all over the world. 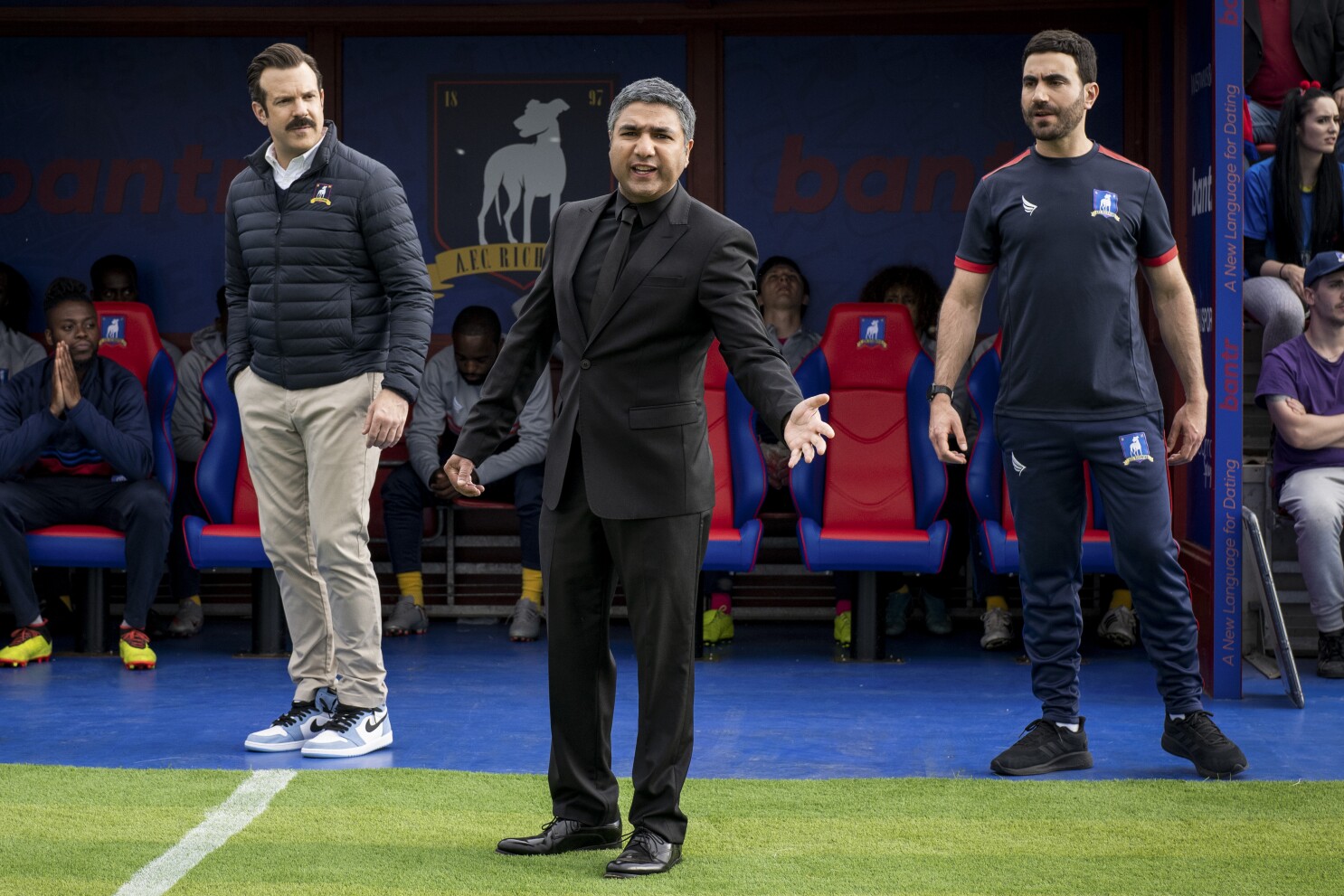 Following its clean sweep at last fall’s Emmys, this feels like a given. With a charismatic and lovable cast led by Jason Sudeikis, the series is a hilarious and heartfelt fish-out-of-water story. Following an American football coach transitioning to coaching a British soccer team, the show is an engaging tale of determination and grit. Sudeikis is surrounded by a supporting cast featuring Hannah Waddingham, Brett Goldstein, and Juno Temple who offer distinct contrasts to Lasso’s consistent positivity. Additionally, season two ups the stakes and provides relatable commentary on mental health issues, and also turns Nick Mohammed’s plucky Nathan Shelley into a believable conniving villain. Season three cannot come soon enough!

Brian Cox is an absolute powerhouse of an actor. No stranger to the Golden Globes thanks to his roles in Nuremberg and even just last year for Succession, he shows no signs of slowing down as the twilight of his career approaches. As Logan Roy, Cox displays grit and fortitude convincingly. Therefore, having picked up the trophy at last year,s ceremony but failing to gain the Emmy last fall, look for the Hollywood Foreign Press to continue to give the legend his roses.

Mj Rodriguez feels like a performer on the brink of immortality. Her role in Pose is a conglomerate of pain and power and Rodriguez deserves her time in the spotlight because of what she brings to it. Rodriguez brings grace and power to every scene she’s in. Moreover, honoring a transgender performer with as much talent and star power as she is a step in the right direction for the HFPA amidst its host of controversial decisions over the years.

While both Steve Martin and Martin Short deliver hilariously brilliant performances in Hulu’s Only Murders in the Building, any Best Actor category featuring Jason Sudeikis as Ted Lasso feels like his to lose. Mixing wit with politeness and a little bit of trauma offers the actor to depict the highest highs and the lowest lows. Season two sees Ted Lasso confront the moments throughout his life that he has suppressed and provides some of TV’s best moments of 2021 such as him discussing the day his father committed suicide. Additionally, Sudeikis has created an all-time iconic character with Lasso and he will likely go on a Julia Louis-Dreyfus-like run with award win after award win.

What better way to say farewell to HBO’s game-changing series Insecure after its recent series finale than honoring the creator and star, Issa Rae. The HBO comedy Insecure has spent five seasons highlighting L.A. neighborhoods that often get overlooked, Rae shines a light on a community and uplifts the people with it. While both fans and critics alike will tout positive reactions to the series, it’s often the bridesmaid and never the bride in large categories like this. Hopefully, Issa Rae is able to say goodbye to such a memorable character by accepting an award for playing her.

Actor in a Miniseries or Television Film: Paul Bettany – WandaVision (Disney+) as Vision

What are your thoughts? Do you agree or disagree with the predictions presented in the latest edition of Full Circle Forecast? Be sure to make your voice heard and sound off in the comments below!