This is a spoiler review for Episode 7 of The Rings of Power.

From the time you pull up episode 7 of The Rings of Power on Amazon Prime, the title alone feels startling. Calling the penultimate episode of the show’s first season “The Eye” is bound to raise some eyebrows, given what fans of the franchise know of the state of Sauron in the legendary cinematic trilogy. Moreover, following the dramatically devastating events of episode 6, it’s clear things will get much worse for the heroes at the center of the story before they can begin getting better.

However, while episode 6 focused on the battle for the Southlands between the men of Númenor, a couple of well-meaning elves, and the Orcs (led by the Uruk Adar), episode 7 reminds viewers that there are so many more plot threads that need to be addressed before reaching the end of the season. As the Harfoots continue their migration, they are seemingly hunted by the mysterious whisperers, who are desperate to get The Stranger.

Everyone on social media has a different guess about who The Stranger is. From Sauron to Gandalf to Saruman, Tolkien fans are clamoring for answers regarding the character’s true identity and how he will factor into the overall story of Lord of the Rings as they know and love it. Regardless of who The Stranger ends up being, his helplessness sometimes mixes well with the power we’ve seen him exude and makes for some remarkable moments of tenderness, friendship, and growth between him and Nori. 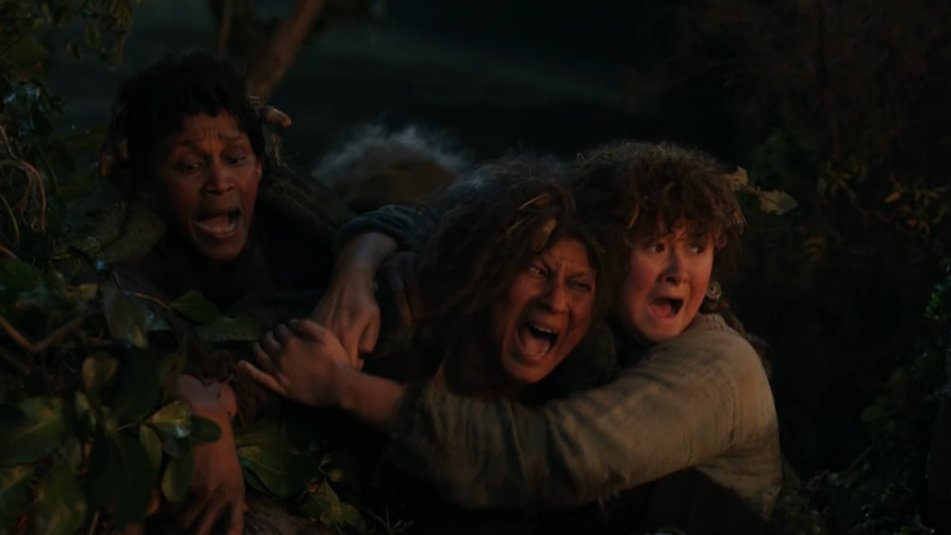 Upon reaching what they expected to be their destinations, The Brandyfoots realize that the rest of the Harfoots have had a run-in with some force of evil. In response, The Stranger exhibits some strange behavior, speaking in a foreign language; he forces a nearby tree to explode, putting Nori in harm’s way. The mystery surrounding The Stranger is the most appealing and concerning part of the series. While The Hobbits end up living in prosperity in the Shire later on in the Middle-earth timeline, not much is known of the fate of the Harfoots. Their remains fear that the species will be tragically eradicated by some nefarious means.

Elsewhere, Elrond continues to desperately gain the trust of the Dwarves through his friendship with Prince Durin. Asking for access to the Mithril mines King Durin possesses, he is met with nothing but hatred and fear from the King. Prince Durin, making one last plea, allows actor Owain Arthur, who has portrayed various characters across Peter Jackson’s two LOTR trilogies, to flex a few of his dramatic chops. Moreso, actress Sophia Nomvete, who portrays Durin’s wife, Princess Disa, also shows some mighty impressive fire in this episode. Overall, the performances in The Rings of Power have been nothing short of phenomenal and add many more memorable turns to the live-action canon of Lord of the Rings.

READ: ‘Triangle of Sadness’ Review: “A Scathing and Hilarious Satire”

Something big is coming. However, it is not easy to predict how the finale next week will play out. There’s a lot of desperation going around in this episode as the walls begin to close in on damn-near every character within every plot thread. With so much narrative to unravel and a story to tell, The Rings of Power has never had to sacrifice character development for big, buzzworthy action pieces.

Quite the opposite is true. Instead, there have been so many smaller, character-driven moments filled with heart and purpose that viewers have to feel as if they know each one on a personal level and feel attached to the outcome of each of their tales. The season finale is shaping up to be an absolute banger, solidifying the new Tolkien series as one of the best shows on television right now; they are just waiting for their chance to shine under the spotlight of a bevy of awards recognition next year. – Christian Hubbard

The Lord of the Rings: The Rings of Power episodes 1-7 are now streaming on Amazon Prime. New episodes air every Friday.

‘Spy x Family’ Gets Tense With "Disarm The Time Bomb"